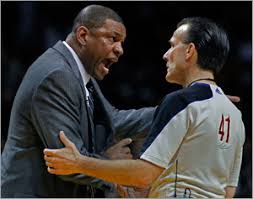 Maybe others will disagree but I thought there was a lot of home court cooking going on here by the refs. There was an early second foul on Carmelo that was invisible and then the last foul on Carmelo at the end of the game was absurd. Pierce was basically humping Carmelo and Carmelo tries to get Pierce off him. This was quite a game deciding ticky tac foul that would not have been called on the home team at that point in the game in a million years. Then to prove that point Pierce has the ball on offense, right before Ray Allen hits a dagger of a three, and Pierce basically shoves a player off of him and no foul is called. If the foul is never called on Carmelo there is a good chance we would have had a much happier recap.

End of the day: