At centre, 6’11, from hell’s kitchen, Joakim Noah will return November 14 th against the King and his Cavs. The $17-million a-year man has struggled during his time in New York so far, and with younger, better options ready to play meaningful minutes does Noah get another shot? More importantly what does Noah’s second chance role look like? 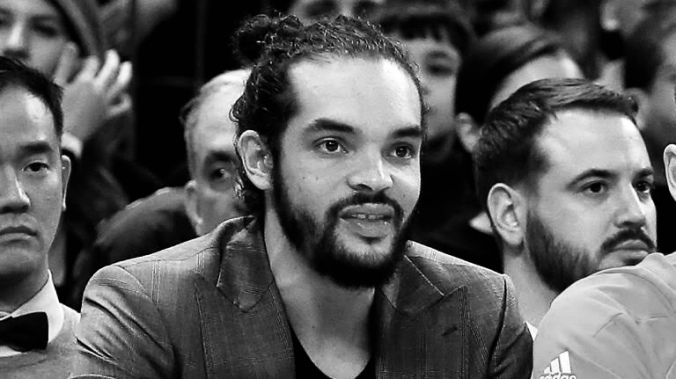 Over a year ago Phil Jackson offered Noah a huge 4-year deal which will send around $17- million plus per-year to Noah, paying him until he is 34. At the time, Jackson sold a lot of Knicks fans on Noah’s defence, rebounding and precision passing. Last season the garden only saw brief glimpses of the upside Jackson had praised before Noah returned to street clothes with injuries (sore left hamstring/ankle), then the PED suspension at the end of the season (12 games).

Since Noah has been out, the Knicks have transformed their roster into a young, hungry, and centre heavy team. Porzingis has developed into the superstar many predicted he would become a couple of years from now, currently the NBA’s 3 rd highest scorer (29 ppg). Enes Kanter has been exciting with his polished low post game and relentless rebounding (9.9 rpg), even Willy Hernangomez (2016-17 1 st team all-rookie) has had to sit a lot this season because of Kanter’s fireworks. And I haven’t even mentioned a current crowd favourite at the garden, Kyle O’Quinn, who like Porzingis has taken a big step up this year that many did not expect. So, with Kanter playing 24 minutes, O’Quinn playing 16.4 Minutes, and Willy playing just shy of 10 minutes, where does that leave Noah?

The 10-year veteran who won two national championships with Florida in college, and three years ago was in the conversation for MVP will have to fight for minutes. We have already seen coach Jeff Hornacek rewarding his players in minutes for the effort they are giving in practice, and more specifically their defence. Most noticeably Willy Hernangomez has gone from Marc Gasol look-a- like (according to Carmelo Anthony) to role player, because Hornacek has rewarded newbie Kanter for his defensive efforts. While both Willy and Kanter have been battling for minutes through an increased focus on defence neither are projected to be great rim protectors anytime soon.

ESPN’s Jaylen Rose says there are two kinds of players in the NBA, skill players and will
players. Generic as that statement may seem, it does ring true in the league, and Joakim Noah has made a career out of being one of the best ‘will players’ in the NBA. His gritty play may be more suited to the noughties, or even the 90’s, but that toughness Noah attributes to ‘growing up in New York’ is valuable. Granted it is not like the $17-million dollars of cap space, but never the less, it is valuable.

During Joakim’s media day interview he spoke of redemption, ‘I just want to redeem myself, for myself’ he added that he wanted to ‘make peace’ with the fact he got paid ‘a lot of money to be here’. At the time Noah’s personal interview did not truly register as anything noteworthy, but as we creep closer to his return, it may be a positive sign for the young Knicks.

So what does a redemption season look like for both Joakim and the Knicks? This debate has been ongoing for a while, many still see Noah playing meaningful minutes next to Porzingis. On the other end of the conversation Noah is collecting DNP’s and eventually getting removed from the roster via trade or buyout. The Knicks coaching staff will no doubt throw out some strange line-ups after Noah returns. Hornacek & Co, will be praying for a Joakim that resembles himself three years ago. However, his stats across the board both offensively and defensively have been in quick regression over the past three seasons. Multiply that with a long grocery list of injuries and it becomes very clear that Joakim’s most effective basketball has been left in Chi-Town with no intention on migrating to New York.

If he doesn’t play well enough to secure minutes, which seems inevitable with the log jam of talented centres in NY, what can the Knicks do? Trade him? The percentage of that happening without losing a young asset is low, very low. Maybe they can buy out his enormous $17-Million dollar plus contract? The percentage of that happening is equally depressing for Knick’s fans.

Beneath all of the accolades Noah received while he was with Chicago and the drama he has faced in New York he does still have an important role to play on this young Knicks team. If he is willing to buy in the Knicks could make use of Noah as the veteran that keeps this team honest. With so many young players the Knicks need a veteran that has always emphasized defense, ball movement, and effort during his 10-year NBA career. The young Europeans in Willy Hernangomez and Enes Kanter will need another voice in their ears other than Hornacek throughout the season, and Noah seems like the best candidate.

A leadership role may also benefit fellow Frenchman and newly drafted rookie Frank
Ntilikina. We may have already seen some of Noah’s defensive intensity rub off on the
Knicks point guard of the future, with his relentless ball pressure and razor-sharp instincts for cutting off opponents passing lanes. Frank is currently averaging 1.7 spg whilst playing only 17 minutes a night.

By no means is a bench heavy leadership role the best way to spend $17-Million in today’s NBA. However, with a new front office looking to make the Knicks interesting again, Noah’s large contract may act as a safety net during the next 2 years’ of free agency. It will prevent the tandem of Scott Perry and Steve Mills from over paying mid-level players (like Tim Hardaway Jr.). Then once Noah’s contract comes off the books, the Knicks will have a much better young core, and may only be a few pieces away from being interesting.

The NBA is a fast-paced league but for the Knicks at least it seems the best way to become truly relevant again is to take it slow, real slow.

Marc and Jay debate whether the Knicks should trade for Kyrie Irving, and for how much. What to do with the Melo situation, a look at the bench, and more.

Marc and Jay are joined by Chris Axmann (@AlmightyBallin) from the Almighty Baller Podcast Network as they talk about the Knicks rise up the standings, O’Quinn playing well, Noah having a travesty of a contract, the bench playing well, and much more.

Marc and Jay talk about the past weeks games, the all of a sudden good bench, Noah’s struggles, the team meeting, and much more

Marc, Jay and Sean get ready for the season with some predictions, analyzing the roster, Marc setting a milestone by almost staying positive for the entire episode (almost), debating Phil Jacksons moves, and much more

Both the Golden State Warriors and the New York Knicks entered Friday night’s game with a bad taste in their mouth, suffering huge defeats in their previous game. Golden State lost to Chicago 103-83 Wednesday night, while New York got humiliated by the defending Champions Miami Heat 108-82 the night before.

New York went on a 9-2 run early in the second quarter, to cut the deficit into single digits 48-39. In a blink of an eye, any hope the Knicks had of coming back disappeared with the Warriors going on a 25-13 run to end the second quarter. By the end of the first half the Warriors were ahead 73-52, the 73 points were the most points New York had given up in the first half. The Madison Square Garden crowd booed their home team off the court. Many more cascade of boos would continue to serenade the Knicks throughout the night, and deserving so. END_OF_DOCUMENT_TOKEN_TO_BE_REPLACED

Jay and Marc are joined by Jim Cavan from Knicksblogger and We’ll Always Have Linsanity.  The show starts off with Marc providing a list of ten positive things.  You can probably guess what we talk about after that, Mike Woodsons coaching decisions, Kidd and JRs extended slumps, the benching of anyone that can hit a three, the overall futility of pretty much everyone.

Jay and Marc apologize for being so wrong about Amare.  Recap of the last few games, looking forward to the rest of the February schedule, Tyson Chandlers impressive run of rebounds and more  Download Episode 172

Amil joins us today.  Marbury wants attention, everyone has a comment about the Knicks, Kenyon Martin and Tracy McGrady, The Dream teaching the Knicks players some tricks, Harrellson going to Miami, JR Smith, and listener questions.  Download Episode 145

Question of the day: Who has a better bench, the Knicks or the Nets?