In Episode 447 we proposed 29 trade scenarios involving the Knicks, one for each team in the NBA. Not all of them were great, but Marc and Jay each proposed three scenarios that we agreed were pretty interesting and would work for both teams.  In no particular order here are the 4 proposals:

The Celtics do this if they get paranoid about Haywards health and Roziers regression and want to clear up a lot of cap space, the Knicks do this if they think Hayward bounces back next season and think Rozier might look better in a new situation. 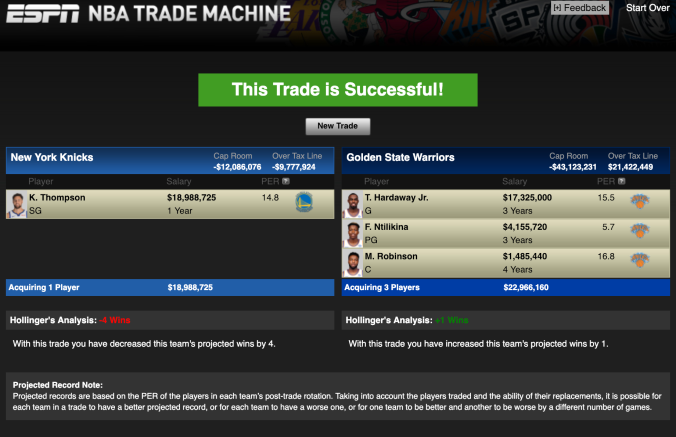 The trade machine says the Knicks only get 1 game better, but if I were a betting man I’d guess the Knicks would be way better after this trade. Of course the only way the Warriors do this is if Klay says he’s definitely leaving and wants to be in NY.

#3 – Knicks get Ben Simmons and T.J. McConnell for Kristaps Porzingis and Emmanuel Mudiay

Too many ball handlers on the 76ers right now with Butler and Embiid, and Simmons seems like the odd man out. He can be the man in NY and Philly can have a front court of Porzingis and Embiid for a decade. 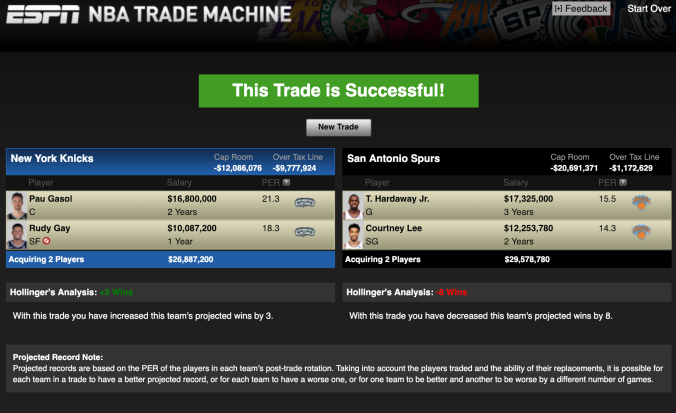 The Spurs do this because they are in win now mode and this makes them better. The Knicks do this to clear up a bunch of cap space over the next two years.

4 in a row down in South Beach:

The Knicks took their talents to South Beach to take on the injury riddled Miami Heat, where they beat the Heat at the American Airlines Center, 114-103. After a sluggish first half that saw the Knicks trailing by 1, they came out of the locker room ready to take care of business against Miami. Carmelo Anthony finished this one with a game high 35 points, and he absolutely caught fire in the third quarter. Kristaps Porzingis had his third straight poor shooting game, but had 14 points and 12 boards. Joakim Noah had a double-double, and Kyle O’Quinn continued to impress with 12 points, 7 rebounds, and 4 assists. Derrick Rose had to leave the game early due to back spasms, which could be an issue, since the Knicks play again tomorrow night. Hassan Whiteside finished the game with 23 points and 14 rebounds, and Goran Dragic paced the Heat with 29 points.