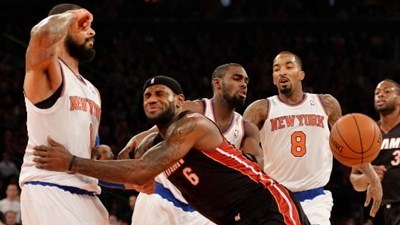 Written by William Lee
Normally I would write recaps on games for New York Knicks Podcast, but for the Heat at Knicks game January 09, 2014 I would like to try something different. I want to point out some positives that came out of the victory over the two time defending Champions Miami Heat. Some positives that if it continues to hold, may offer Knicks fans a slim hope, if and when New York sees them in the playoffs this spring. Now I want to just preface that I am not a coach, or anyone that played for his school’s team, just someone that is a basketball fanatic that watches way WAY too much basketball… Also I am admittedly going to be a homer, so maybe I am seeing everything from orange and blue goggle glasses. With all that said, here are some positives I take from Thursday night’s game, and situations that have to occur if you have any chance of beating the Heat once, let alone four times in a series.
Stretch Four  – One of Miami’s strength is their ability to overload the strong side on defense, yet have quick enough players to recover on the weak side. It helps when you have Lebron James and Dwyane Wade when using this defensive philosophy. Though we have seen stretch fours, give the Heat troubles, when the four is able to shoot the ball well from deep along with a good shooting backcourt. The most notable example of this was when the Dallas Mavericks won the NBA Championship in 2011, with arguably the best stretch four, Finals MVP Dirk Nowitzki. The Knicks seemly always have a stretch four on the court at all times, be it Carmelo Anthony or Andrea Bargnani. Bargnani had a great shooting night Thursday night, and highlighted this theory when he was able to knock down open shots, or attacked the rim when the defense was stretched too far. Of course Carmelo Anthony is going to be Carmelo Anthony, and we saw what he can do when he was put in the stretch four position last season (2012-2013). Side note, this was the biggest disappointment of last season when New York was eliminated and New York fans could not have seen what would have played out if the 2012-2013 Knicks team played against the Heat, and see what they could have done. END_OF_DOCUMENT_TOKEN_TO_BE_REPLACED

A big thanks to Patrick for making these charts. So we’ve been talking about how the Knicks offense is predictable when Melo and/or JR is on the floor and stagnant when they are off.  And this chart would be even more skewed if you consider Amare missed 53 games last season.  This breakout of team scoring pretty much sums that up:

Now lets take a look at that when compared to the two teams that made the finals last year.  First the Miami Heat: END_OF_DOCUMENT_TOKEN_TO_BE_REPLACED

Chandler had the flu, Barons back tightened up, Shumpert tore his ACL, the refs went WWE on us and didn’t even call the game fairly and the Knicks were doubled up.  This was all before halftime.  We try to figure out what happened.  Download Episode 125

For some reason Heat are considering actually signing and playing Eddy Curry. I understand the Heat are undersized and Curry has size (a whole lot of size) but is this a joke. The only way Curry would help the Heat is by producing fewer leftovers after team dinners.  As a Knick, I would like to advise the Heat that this would be a fantastic move for them. He was really an invaluable paperweight on our bench.

We recap the Hawks/Knicks game, talk about Cleveland beating the Lakers and then spend the rest of the episode talking to Mike Kurylo from Knickerblogger.net.  We talk about how Mike got started, some of the moves from the Isiah era, misleading stats, Carmelo Anthony and other potential trades, Donnie Walsh, favorite all-time Knicks and favorite current Knick, Mike D’antoni, and hating the Heat.  Download Episode 37

Marc and Jay give their thoughts on the Celtics and Heat games.  After the last three days we’re definitely looking forward to the Cavs game.  We have an Anthony Randolph Sighting.  We have a debate about whether to trade for Carmelo Anthony or not. Download Episode 20

Jay and Marc each went to a Knicks game this week and give their comments on the games.  We respond to a listener email and introduce two new segments into the show; PotStats and 2 Heated Minutes.  I got really drunk during my other podcast and messed up the settings on my equipment so we have some technical difficulties this episode.  Sorry about that.  Everything is fixed and episode 18 sounds great and will be up soon.  Download Episode 17

The Knicks finish November above .500 for the first time since 2005.  Another player puts up crazy stats against Golden State.  Horrible trade suggestions.  We make our predictions on how will the Heat handle the crowd in Cleveland on the 2nd.  We also talk about the Knicks less than friendly schedule in December and try to figure out how the Knicks will fare.  Download Episode 15