Jay and Marc react to the Bargnani trade, the JR resigning and take a look at some of the other moves that have been made around the league.

This story is getting old.  No Melo, Felton, Shumpert, and Wallace and Camby left early with back spasms.  Oh and Indy happens to let up the fewest points in the league.  It was obvious points were going to be hard to come by but 34 points at the half?

Well that was close.  After starting the game down 14-2 to the lowly Magic the Knicks come back to beat Orlando.

Amare played for the first time this season and Ed Malloy (who was surprisingly less biased than usual tonight) was reffing so you knew there was no way the Knicks were winning tonight.

Another reason they lost is this shot chart that I put together:

Everyone on the Knicks is injured.  Lets hope this is a blowout so Prigs can play a lot of minutes and save some wear and tear on Kidd, since he’s going to be playing a ton of minutes in January.  Other things to look for are Camby continuing to progress, Brewer getting out of his terrible slump (26% from the field and 6% from 3 point land this month).  Comment below as the game progresses.

Looks like the hazing continues for Chris Copland.  This weeks tweet of the week comes from Marcus Camby. 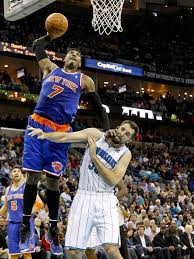 Marc and Jay recap the last few games, our new segment “where are they now”, questions from listeners, fantasy basketball, the upcoming schedule including the Knicks first time facing Jeremy Lin and much more.  Download Episode 155

Will the Knicks bounce back against the Pacers or will a billion articles be posted tomorrow about how the 6-0 start was a fluke?  Comment as the game goes on.

It was an ugly game but a win is a win and the Knicks are still undefeated.  The real test is the Thursday/Friday back to back against Memphis and San Antonio.