Mike from Mike Delivers and Bad Weather Fans joins us to talk about the Derrick Rose trade, rooting against the Nets/Knicks, potential future moves, and more

The EuroKnicks came to play!

After all the talk of too much triangle and Kurt Rambis taking over as the defensive coach, the Knicks came and played a solid basketball game, as they defeated the Nets at the MSG, 110-96.

Even though it was against the rebuilding with no draft picks Nets, this was the best game the Knicks played on the defensive side of the ball. After giving up 55 points in the first half, they tightened up the defense and gave up only 41 points in the second half. A huge improvement from the past few games. This is also the first time the Knicks hadn’t given up 100 points in the game. Baby steps, as the defense still needs to improve if they expect to compete with the better teams in the NBA.

Could the Knicks perhaps have (gasp), a playable bench? Well, Willy Hernangomez, Mindaugus Kuzminskas, and Brandon Jennings were excellent off the bench in the second half. Jennings had his best game as a Knick, with a season high 11 assists. The biggest positive of the game was Hernangomez though, as he definitely locked up the backup center spot for at least another game (sorry KO). 14 points on 6-7 shooting with 6 rebounds in 15 minutes? Sounds great to me. Can’t expect this every night, but the defense and ball movement was awesome to watch. The lineup with Jennings, Vujacic, Kuz, KP, and Hernangomez was a lot of fun as well.

Finally, we get to Porzingis.

I still don’t know why it took the Knicks this long to realize that Porzingis in the pick and roll is their best offense. After too much triangle, KP started playing pick and roll with Jennings and immediately hit consecutive threes, and had an and one dunk after a sweet pass from Jennings.

Why the Knicks don’t run that every time down the court is beyond me. He finished with 21 points on 7-15 shooting, 8 boards, and 2 blocks.

Solid outing from those three, even though Melo only really had it going in the third quarter.

This was a solid game to build on, with a tough matchup in Boston this Friday, as they look to get back to .500 with a win there. 3-4.

Marc and Jay go into the second stage of grieving, interview Quincy Acy, the NY Post rumor, the Knicks winning streak comes to an end, fantasy basketball, the Nets trying to blow their team up, Marcs idea to eliminate tanking, much more

New York hardcore basketball fans, Knicks’ fans and Nets’ fans alike marked down December 2, 2014 on their calendars before the season began. Both going into the season optimistically, unfortunately those expectations were never met. Both teams so far underachieving, needing to combine to produce double digit victories, while combining for a total of 23 losses. Not much of a bragging right for whoever wins really.
To start the game Brook Lopez shot an air ball, but quickly heated up, scoring six points after that misfortune. Lopez led the way for Brooklyn, constantly attacking the paint. Lopez scored of his 19 points of his 23 points by halftime. The Nets had their way in the paint scoring 30 points in the paint by halftime, with 20 points alone just in the first quarter. This theme continued as Brooklyn outmuscled the Knicks, scoring 48 points in the paint, and grabbing 21 offensive rebounds.
Carmelo Anthony shot a couple of air ball threes before finally getting it going late in the first quarter, scoring six straight points for New York before finally taking a rest with a little under two minutes remaining in the opening quarter. Without Anthony there was no other reliable shot creator on the team, and the Nets went on a 6-0 run, giving Brooklyn a double digit lead 27-16. This is especially true with the absence of J.R Smith, who missed the game with the “flu”.
New York clawed back into the game, holding Brooklyn to one field goal in the opening five minutes of the second quarter. The Knicks got into the bonus early in second quarter, but did not take advantage of this, going to the line only one more time before halftime. Even so, New York kept it close, always within arm’s length of tying the game, within one possession several times.

END_OF_DOCUMENT_TOKEN_TO_BE_REPLACED

Marc and Jay talk about Melo’s new contract, Lebron leaving the Heat, all the other free agency moves, the state of the eastern conference, laughing at the Nets, and much more

Marc and Jay recap the final games of the first round, get a visit from DRose and D12, and answer listener questions.

The New York Knicks continued to thrive in the role of spoiler Tuesday night, defeating the Brooklyn nights 109-98. Brooklyn was trying to clinch their fifth seed in the Eastern Conference Playoffs, deploying their full roster on the Knicks, while New York was without their star player Carmelo Anthony after an MRI revealed a small labrum tear. New York shared the ball well without Anthony in the lineup, six players scored double figures in the victory.

With nothing to play for but pride, and what little bragging rights for New York there is…the Knicks came out to a strong start, connecting on their first three three-point attempts to get an early 9-5 lead. New York without their leading scorer, Amare Stoudemire stepped into the role, and could not be stopped, attacking the paint with frequency. Stoudemire had a strong first quarter, getting to the free throw line at will, scoring seven points in the quarter, he ended up finishing the game with 14 points.  The Knicks would go on an 8-0 run to finish the first quarter with Tim Hardaway Jr. nailing two threes, and a Shannon Brown layup. The run gave New York a 29-18 lead going into the second quarter.

The second quarter, and the first half in general was a parade to the free throw line for the New York Knicks. The Knicks eclipse their season average in free throw attempts by the first half, whom are the league worst in attempts at 20.1 free throws per game, attempting 25 free throws. This didn’t mean there wasn’t any highlight plays though, in fact there was a sequence of highlight plays, starting with a “Man Jam” from Stoudemire, END_OF_DOCUMENT_TOKEN_TO_BE_REPLACED 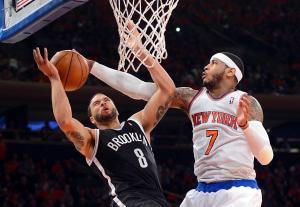 Early on in the first quarter it was a battle of tag teams between the duos of J.R. Smith and Amare Stoudemire, and the combination of Deron Williams and Joe Johnson. Smith and Stoudemire combined to score the first 16 points for New York, with each scoring eight points to help keep pace with the Brooklyn Nets, tying the game up at 16-16, eight minutes into the game. Deron Williams answered with a driving layup, giving him nine points in the opening quarter, who was one-half of the Net’s tag team attack, with Joe Johnson scoring seven points to compliment his backcourt-mate.

You don’t have to be an expert oddsmaker to understand the Knicks chances of winning these days.  For example, one look at these official lines for NBA betting tell that story.  But we could all tell that the Knicks, Shumpert in particular, wanted this one.  With both teams exchanging punches, Knicks tagged in Iman Shumpert. Shumpert came off the bench, giving the Knicks a huge spark with his defensive intensity. Shumpert stole the ball twice within the last 17.9 seconds of the first quarter, leading to a Carmelo Anthony dunk, and then a Tim Hardaway Jr. buzzer beating three, giving the Knicks a 29-20 lead at the end of the first quarter. This run bridged into the second quarter, where it was extended to a 20-2 run, giving New York a 39-22 lead with 8:29 left in the first half.

Shumpert continued to put his imprints on the game, when he grabbed an offensive rebound, taking the ball back out to size up Mirza Teletovic, where he then put the moves on Teletovic, going behind the back on him for a reverse layup! This gave New York a 45-30 lead with 6:16 remaining in the quarter. A minute later Shumpert would disrupt Marcus Thornton’s pass to the post, collecting his fourth steal in the first half, and then running out for an and-one opportunity. END_OF_DOCUMENT_TOKEN_TO_BE_REPLACED

“Lets Go Knicks” chants rain down in the Barclays Center

Tonight’s much hyped match-up between the New York Knicks and the Brooklyn Nets before the season began, wasn’t exactly the marquee match-up we all hoped it would be. Instead it was a match-up between the two bottom feeding teams of the Eastern Conference (which is saying a lot with only two teams over .500 in the Eastern Conference). Each coming into tonight’s game with 13 losses, it was a must win atmosphere for both teams, but it was the Knicks who came out desperate. The Knicks blew out the Nets, looking much like the Knicks’ of last year, where they made an NBA record breaking three point field goals, knocking down 16 from beyond the arc, cruising to a 113-83 victory over their inter-borough rival.

Andrea Bargnani as usual, got off to a great start for the Knicks in the first quarter, going a perfect 4/4 from the field for nine points, and making his presence felt on the defensive end with two blocks. On the very first possession Bargnani blocked Brook Lopez, and then immediately knocks down a jumper on offense. Bargnani at the 8:44 mark of the first quarter again blocks Lopez, which lead to an Iman Shumpert three on the fast break. The Knicks went on a 12-2 run, capped off by a Carmelo Anthony three, to give the Knicks a 24-10 lead. This prompted the first “Let’s Go Knicks!” chants at the Barclay Center. More “Let’s Go Knicks!” chants were heard on the next Knicks’ possession when Bargnani completed an and one. The Knicks lead 29-23 after the first quarter, finishing 70.6% from the field, with four threes. The Nets shot 36% from the field, but kept themselves in the game with nine offensive rebounds, leading to ten second chance points. Brook Lopez had seven of the offensive rebounds himself. Lopez and Joe Johnson scored eight points each in the first quarter, receiving very little help, with the rest of the team combining for less than eight points combined. END_OF_DOCUMENT_TOKEN_TO_BE_REPLACED

The Knicks are set to play the Nets tonight, and it couldn’t lack any less luster. These two teams were supposed to be jockeying for a high seeding in the playoffs. Instead, you have two very injured teams that look like easy chum for the NY media feeding frenzy. 1

This wasn’t what was promised to us over the summer. Deron Williams attacking a child Knicks fan, Pierce embracing every chance to proclaim his hatred or leave the Knicks out of the contender conversation, JR getting on his social media soap box, to Dolan and Prok  – you expected a 12 round grudge match. What was supposed to be a clash of the titans has turned into a slumber party pillow fight.

No matter who you think is worse, you can’t argue with one simple fact: The team’s with the two highest payrolls, Brooklyn at $101 million, and the Knicks at $87 million, have less than half the wins of the East leading Pacers combined . By building through the draft, shrewd signings and trades, the Pacers are paying homage to the greatest of all small market teams, the Spurs. The two hometown teams have done the complete opposite. Trading picks for players who are far from superstars & taking on monstrous contracts has given them the headlines they lust for, but not the tangible results to cement their claim to contender status. Don’t act surprised. Patience is a virtue, but long term growth will always be throw aside for a quick buck in Gotham.  END_OF_DOCUMENT_TOKEN_TO_BE_REPLACED