Written by William Lee
New York matched their longest winning streak all season, collecting their fifth straight win Wednesday night defeating Boston 116-92.
An extremely thin frontline, got thinner Wednesday night, as Tyson Chandler did not play due to personal reasons for a second consecutive game, and Amare Stoudemire sat out to recover, who has been playing tremendous basketball both on offense and defense. Without Chandler and Stoudemire, Cole Aldrich stepped into the starting lineup. To the Knicks credit, every player stepped up to the challenge, especially Aldrich and Earl Clark, who saw meaningful minutes due the decimated frontcourt. Aldrich collected a double-double with 12 points and 10 rebounds, along with three blocks for a +19 +/-. While Earl Clark didn’t have an impressive stat line, his impact overall was felt, stepping into the rotation, giving excellent back up minutes (particularly in the second quarter when Anthony was resting), proven with the best +/- of anyone, +22.
The Knicks scored 68 points in the first half, which were the most points scored in a half by New York. New York put on a three-point shooting clinic in the first half, connecting on 9-of-10 from beyond the arc. Both Carmelo Anthony and Tim Hardaway Jr. connected on three-threes. Anthony started off strong, as per usual, with 13 points in the first quarter. J.R Smith got off to a hot start as well, scoring nine of his 13 points in the first quarter, helping build a 36-24 advantage by the end of the first quarter.
Tim Hardaway Jr. provided a huge lift off the bench, scoring 12 of his 22 points in the second quarter. New York was unconscious on offense Wednesday night, scoring at a 60.5% clip in the first half, leading 68-48 at the half. The Celtics defense looked like they were imitating the Knicks’ defense, constantly switching out bigs onto New York’s perimeter players, which forced mismatches in favor of the offense. This is scenario that played out for most of the first half, if the double didn’t come, Anthony easily scored on crossover dribble pull ups, and if the double came, the ball swung around the perimeter for a wide open three. New York handed out 15 assists on END_OF_DOCUMENT_TOKEN_TO_BE_REPLACED

Written by William Lee
Raymond Felton made his return to the Knicks after missing the last four games with some nerve complications in his hip. At first Felton looked out of sync with his teammates committing two quick turnovers, but quickly got back on track, finishing the game with 12 points and 7 assist. Blake Griffin got into early foul trouble, picking up his second foul before the half way mark of the first quarter. With the Clippers’ superstar forward on the bench, the Clippers united as a group to take a 29-27 first quarter lead. The Clippers had eight players score by the end of the first quarter.  Carmelo Anthony and Andrea Bargnani got off to a quick start, both finishing in double digit scoring by the end of the first quarter predicated by the Knicks better ball movement. The Knicks finished the first quarter with eight assist on eleven made field goals.
Basketball is a game of runs, and the second quarter featured three prolonged runs. The Clippers opened up the second quarter on an 11-2 run to take a 40-29 lead with 8:20 remaining in the second quarter. The Knicks then went on a 13-0 run to regain the lead 42-40, during this run the Clippers took and missed four straight threes. The Clippers then went on a 9-3 run to end the first half leading 49-45. During the two prolonged Clippers’ runs there was one common denominator; Amare Stoudemire was in the game defending the paint for the Knicks. The first Clipper run ended when Stoudemire was substituted out at 8:13, and then the Clippers went on the run to end the quarter when Stoudemire checked back into the game at 3:37 left in the first half. Whenever Stoudemire was in the game, there was a clear path to the rim, he was completely lost on defense. He finished the first quarter with a +/- of -21, as compared to the current best Knicks defender Kenyon Martin, who had a +17 at the end of the first half. Overall Stoudemire finished the game with an even worse+/- at an astonishing -29, while Martin was by far the best Knick in +/- staying at +17. END_OF_DOCUMENT_TOKEN_TO_BE_REPLACED

Marc and Jay talk about the Detroit and Indiana games, minutes management, Shumperts foul, top 5 dumb comments we’ve seen this week, Marcs notes from the Pistons game, what we’re going to do if the Knicks lose against Washington and much more 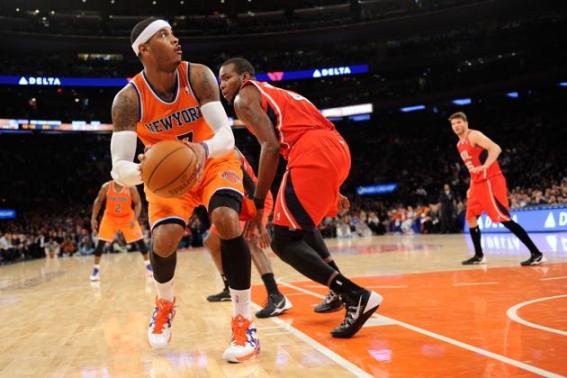 Tonight’s matchup between the Atlanta Hawks and the New York Knicks marks the second time the two has faced off this week. It is very difficult to defeat the same opponent twice in the same week, and this proved true tonight, with the Hawks winning 110-90. The Hawks had a balanced attack, with eight players in double figures scoring. The game was close through the first quarter, the Knicks did not shoot well all night, but scrapped to get the offensive rebounds. The Knicks had six offensive rebounds, for eleven second chance points, in the first quarter. The rebounding edge gave the Knicks a 26-24 lead at the end of the first quarter. The Hawks were content on settling for three points shots early in the game, finishing the first quarter with ten attempts. The Hawks left a lot points off the board, missing wide open threes, especially Kyle Korver, who missed three straight before making one at 4:06 in the first quarter. This three kept Kyle Korver’s streak alive for consecutive games with a made three, pushing it up to 83 games straight. END_OF_DOCUMENT_TOKEN_TO_BE_REPLACED

Jay and Marc have possibly their most positive episode ever after the Knicks win in OKC.  Talking about the last two wins, Melo going for the scoring title, who’s been key in the win streak and more.  The guys get some criticism and Marc doesn’t seem to like it.  Listener questions.

Jay and Marc can’t decide if they are happy about the winning streak or worried about their hobbled big men.  Interview with Amare, guessing what big men will be available going forward, comparing the Knicks roster to the cast of Walking Dead, listener questions and much more.

Jay and Marc test our their new skit, talk about the last few Knicks games, debate whether some streaks are truly unbreakable, rank Felton among other PGs, cutting down the Nets and facebook questions.

The Knicks are awesome and we are happy.  We go over what is going right, what we are worried about, listener questions, our new segment which isn’t named yet but we make fun of the Nets a lot, and more talking about what is going right and how happy we are. Download Episode 152

Centers love playing the Knicks, but the streak continues.  Should Eddy Curry get back on the court?  We debate whether Melo wants to get traded now or come to NY in the offseason.  Too many fouls in the NBA.  PotStats.  2 heated minutes.  Changing team names.  Download Episode 19