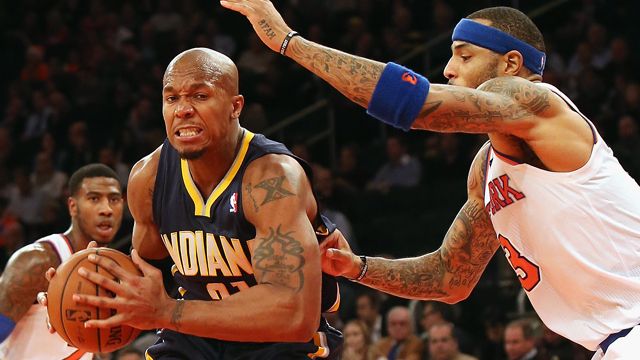 Written by William Lee
Paul George outduels Carmelo Anthony in the Pacers overtime win against the Knicks 103-96. George sent the game to overtime on an Iman Shumpert foul on a three point attempt, he calmly knocked down all three free throws. With the game all tied up at 89-89, the Knicks had 5.2 seconds left to win the game, going with their superstar Carmelo Anthony, but he could not deliver the victory, missing on a turnaround jumper. In the extra period Paul George scored nine of his season high 35 points, to pull away from the Knicks. George showed his complete array of offensive repertoire in overtime. Drawing first blood in overtime with a three to push the Pacers ahead 92-89 with 3:43 left in overtime. Then he scored on a pull up jumper, and then got Andrea Bargnani up in the air on a pump fake, and drawing a foul, knocking down both his free throws on the next possession. With 1:08 left in overtime George hit a dagger step back jumper to put the Pacers ahead 99-93. The Knicks could not keep pace with the Pacers in overtime, as Carmelo Anthony was the only Knick who scored, that wasn’t in garbage time. He tried his best to keep the Knicks close scoring four points in the extra session.
Carmelo Anthony started off great, scoring 17 points and grabbing seven rebounds by the end of the first half. The Knicks were the team that looked like they were the defensive stalwarts holding the Pacer scoreless for five minutes to start the game. The Knicks were up by as many as 13 points to nothing, before the Pacers clamped down on defense. The Knicks missed ten straight field goals, fueling a Pacers 14-6 run to end the first quarter. This was highlighted by a Roy Hibbert bank in three to cut into the deficit 19-14 to finish the quarter.
There were a few plays that were reminiscence of how the Pacers played the Knicks in the playoffs last spring. On one particular play David West was guarding Shumpert, as he did in the playoffs, leading to a Shumpert three attempt. He missed leading to an Anthony offensive rebound and put back layup, who showed great effort and hustle all night. Anthony collected nine offensive rebounds, with a total of 18 rebounds, one shy of matching his career high. Anthony also worked extremely hard in the post, instead of settling for jumpers tonight.
The referees were a factor in tonight’s game, calling a foul on Iman Shumpert, who barely grazed Paul George to help the Pacers send the game to overtime. They also had to do make up calls midway through the third quarter. Anthony was called for an offensive foul, attacking the rim with Roy Hibbert still sliding in position. Instead of Anthony taking free throws, on the ensuing Pacer possession Hibbert was called for a loose ball foul, a clear make up call. With Hibbert out of the game the Knicks went on a 10-3 run, highlighted by plays that showed what the Knicks are capable of, if they play with maximum effort all the time. Iman Shumpert harassed Ian Mahinmi into a jump ball, then winning the jump which led to a Pablo Prigioni fast break layup, putting the Knicks ahead 57-51 with 3:15 left in the third quarter.
The Pacers went on a 10-0 midway through the fourth quarter to keep pace with the Knicks. A couple of Pacer threes were bookended by Paul George baskets, to put Indiana up by four 79-75 with 5:08 left in the fourth quarter. Beno Udrih put an end to the run, as he had a magical fourth quarter, making incredibly highly difficult shots to keep the Knicks in the game. Udrih was a perfect 4-4 in the fourth quarter, one of them giving the Knicks the lead 87-86 with 1:21 left in regulation, Udrih span out of control and scored in the paint. George Hill had a couple of chances to end the game in regulation with wide open three pointers due to JR Smith overly aggressive double teams, but he could not cash in, and Anthony secured the defensive rebound, and made his free throws to put the Knicks up by three. Then it became the Paul George show the rest of the way into overtime. The Pacers tonight showed why they have the best record in the league, clamoring down on defense, and allowing their superstar player to finish the game off. The Knicks though should not hang their heads, as they showed great effort tonight, and if they can this carry over, it should lead to Ws in the future.