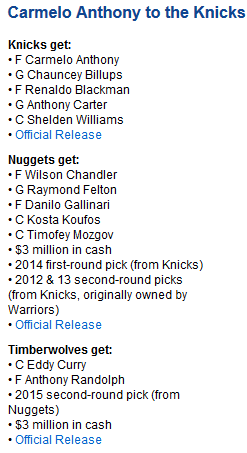 Hard to believe this trade was over two years ago, in a cold February winter night in 2011. Since then it has been an up and down roller coaster ride for the Knicks and their fans. The blockbuster trade brought immediate dividends with the Knicks making the playoffs for the first time since the 2003-2004 season, but was immediately swept by the Boston Celtics in the first round. Then the worldwide phenomenon we all now come to be known as Linsanity occurred the following season. The Knicks had another first round exit, but not before picking up their first playoff victory, in over a decade. With the incredible hype behind Linsanity, James Dolan guaranteed that the Knicks would to match any offer up to one billion dollars during the offseason. All it really took was a poison pill contract worth $25 million over three years, with $14.8 million of it in the third year. Even with the departure of Jeremy Lin, the Knicks then had a magical 2012-2013 season, where the Knicks set a new NBA record with 891 three point shots made in a season. The Knicks broke past the First Round, but not before JR Smith elbowed Jason Terry, prolonging the series with the Boston Celtics. The Knicks then fall to the Indiana Pacers in the Second Round, in a hard fought series.

Up and down, up and down we are along for the Carmelo Anthony era ride of the Knicks. Unfortunately last year may have been the apex of the roller coaster ride up, as this year has been a complete disaster. The Knicks has lost seven straight entering tonight’s match up with Carmelo Anthony’s old team, the Denver Nuggets. Things look bleak now, but it could take a nose dive descent for the Knicks as the Nuggets hold the upcoming Knicks first round pick this year from the Carmelo Anthony trade. The Nuggets helped their own cause tonight, as they sent the Knicks to their eighth straight defeat, winning 97-95.

From the tip, anytime Carmelo Anthony touched the ball, the hometown Denver fans cascaded relentless boos onto their former hometown hero. Anthony struggled early, missing his first four shots, giving the Denver crowd plenty of ammunition. Anthony makes his first shot mid-way through the first quarter, cutting into a Nuggets lead 18-14. Although he could not keep the Denver crowds silent for long, as Wilson Chandler draw a foul on Anthony on the ensuing possession. The crowd erupted with delight, at every Carmelo Anthony misfortune. The Nuggets had their way with the Knicks in the first quarter, ending the period with 14 points in the paint, and connecting on four threes from the outside as well. The first quarter was capped off by an Andre Miller three which bounced in, which occurred because JR Smith kept back peddling even though there were not much options left for Miller. The Nuggets lead 30-20, with Ty Lawson being responsible for 17 points, finishing the first quarter with 10 points and three assist.

In the second quarter former Knicks, Nate Robinson exploded for ten points in six minute of play. Though the Knicks would make a 10-1 run to cut into the Nuggets lead 43-39 with 3:24 remaining in the first half. Kenneth Faried threw down a slam dunk with 8:24 left in the third quarter, pushing the Nuggets lead to 60-54, but was immediately limping after the play. Raymond Felton looked to attack him, but instead slipped and Faried stole the ball. Faried would leave the game with a right quad injury shortly after. Carmelo Anthony tried his best to keep the Knicks in the game, scoring 11 points in the third quarter. Anthony pump faked, and did up and unders a lot more than usual, getting his man in the air, and committing fouls. He finished the third quarter with an and one, keeping the Knicks within distance range, cutting into the double digit deficit, 75-67 Nuggets.

With better ball movement to start the fourth quarter the Knicks were able to cut the Nuggets lead to three, behind a couple of Tim Hardaway Jr. threes. On eight made field goals in the final period only one did not come off of an assist. Even with the hot hand from Hardaway Jr., Mike Woodson decides to substitute back in JR Smith with 6:42 left in the game. The Nuggets went on a 6-0 run pushing up their lead to 94-85 with 1:43 remaining in the game, looking like a sure victory. But out of a time out JR Smith knocks down a three to cut it to 94-88 with only six seconds coming off the clock. JJ Hickson splits two free threes, and on the next possession, clock stops with Wilson Chandler fouling Carmelo Anthony on a drive to the basket. Knocking down both free throws the Knicks were within five points, 95-90 with 1:12 left. Out of a Denver timeout the ball is inexplicably inbounded to JJ Hickson, who again splits his free throws, leading a Rayomd Felton three on the next possession to make it a one possession game 96-93, with 31.4 seconds remaining in the game. Then Wilson Chandler is called for an offensive foul, hooking Kenyon Martin, slapping him in the face with his off hand as he made his move. Nearly committing a five second inbound violation, Shumpert ends up with the ball and goes baseline for an layup cutting the lead to one 96-95 Nuggets, with 19.7 seconds remaining. Ty Lawson is fouled immediately on the inbound, and he misses his second free throw. Carmelo Anthony rebounds the ball and brings it up himself. The Knicks cleared out for Anthony, with Randy Foye picking him up in transition. Knicks in a one possession game, and a clear mismatch, Carmelo Anthony posted Foye up and faded away for the game tying shot. But it was not to be as Foye would be the hero tonight, coming up with the game saving block to the delight of the Denver crowd. The nightmare continues for Carmelo Anthony and the Knicks…