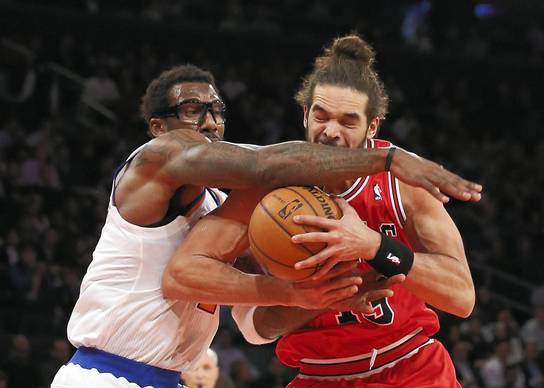 Wednesday matchup between the Chicago Bulls and New York Knicks featured two injury -ridden teams. There would be no game winning floaters from Derrick Rose, as he has since underwent surgery for a torn meniscus in his right knee, since their opening week matchup. The Bulls were also without starters Luol Deng, who is still recovering from an Achilles injury, and Jimmy Butler, out with an injury to his turf toe. The Knicks are still without center Tyson Chandler (fractured leg), and were also without starting point guard Raymond Felton, who pulled his hamstring in the last game.

It was a defensive struggle in the first quarter, with the Bulls leading 17-15 after one period. The Knicks got out to an early lead going on a 9-0 after the Bulls scored the first basket. Carmelo Anthony had four points and an assist leading to an Andrea Bargnani layup during the run. The Bulls though would answer, with a 7-0 run to tie the game up at 9-9. Mike Dunleavy was responsible for all the points in the run, scoring five points and handing an assist to Carlos Boozer for a layup. Both teams would exchange baskets the rest of the way, as the Bulls locked down the Knicks on defense, forcing New York to shot 26.1% from the field. The Knicks also played good defense, getting into the passing lanes, getting seven steals, and causing the Bulls to have eight turnovers in the first quarter.

The Knicks went on a 19-0 run to start the second quarter, sparked by Amare Stoudemire’s eight points off the bench, to take a 34-17 Knicks lead. The Bulls really struggled on offense, missing their first eleven shot attempts to start the second quarter. Mike Dunleavy finally put an end to the Knicks’ run by knocking down a three, the Bulls scoring drought lasted for more than half of the second quarter. This would extend to a mini 7-0 Bulls’ run trimming into the Knicks’ lead to 35-23. Stoudemire stopped the run by knocking down a jump shot, and was shortly substituted out of the game, hearing a loud standing ovation from the Madison Square Garden faithful, when he went to the bench, for giving the Knicks their lead. Loud cheers were heard again on ensuing play, when Kenyon Martin blocked three straight Bulls on one possession! The Knicks lead 46-32 after the first half by playing suffocating, causing the Bulls to shoot 17.4% from the field in the second quarter. While the Knicks shot 70.6%, more than doubling the Bulls in point in the period 31-15.

After Carlos Boozer opened the third quarter with a turnaround jump shot, the Knicks went on a 13-4 run to take a 59-38 lead with 7:42 remaining. New York led by as many as 23 points in the quarter, the Knicks though would lose focus, committing four straight careless turnovers, leading to an 8-0 Bulls run. The most egregious of the four was when Carmelo Anthony threw the ball into the backcourt, and Amare Stoudemire watched Mike Dunleavy pick up the ball and finished a layup, instead of picking up the ball for a backcourt violation. Anthony closed out the third quarter with a reverse layup to stop the Bulls’ run, extending the Knicks’ lead to 68-54.

The Bulls clamped down on defense in the fourth quarter, putting on a press on the Knicks, and it ignited a 16-2 Bulls’ run to knot up the game at 74-74 with 3:38 left in the game. The Knicks went scoreless for four minutes, and started their offense late into the shot clock because of the press. The issue was compounded by the fact that there was also no player movement, as the rest of the Knicks stood around and watched Carmelo Anthony isolate when given the ball. Anthony went 1/7 from the field in the quarter because of this. It was Amare Stoudemire who came in, in the clutch knocking down a shot with 2:34 remaining in the game to give the Knicks the lead, 76-74. The Knicks would finish the game strong on the defensive end, causing a Bulls’ 24 second violation and then causing another turnover on the next possession. Carmelo Anthony iced the game on the free throw line for an 83-78 Knicks’ victory. Anthony finished the game with 30 points 10 rebounds and 4 assist, but it was Amare Stoudemire, who made his presence felt with a very impactful 14 points 9 rebounds.  If Amare can become a consistent second option for the Knicks, maybe New York can string together a couple wins and find themselves in the playoffs, which shouldn’t be hard looking at the Eastern Standings.