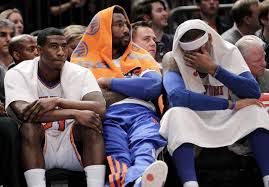 Anyway back to the Knicks this season… I mean really where do I start with this team. They are a terrible basketball team. They have the most losses in the NBA thus far with 27 and have the second lowest winning percentage at .156. Only better than the .138 winning percentage of the 76ers. I still love the Knicks but I no longer find myself wanting to watch every game possible. The past weekend I saved from watching the Knicks take on the Suns due the fact that Syracuse (my school) was playing #7 Villanova, and while the Orange ended up losing it was a lot more compelling than the effort put worth against Phoenix. The following day I was saved from watching the Knicks because the Rangers were playing the Hurricanes and because of the NFL. Now I did tune in to watch a little bit but is it me or does every game feel the same? To me it feels as though in every game we come out, have a poor start and then we try to mount an unsuccessful comeback attempt. Even against the Wizards on Christmas the Knicks allowed for the Wizards to put 34 points in the first quarter. That was the most points the Wizards scored all year in the first quarter. I guess you can count that as a Knick effect…

The poor starts need to be addressed and in my opinion that falls on coaching. Now I said last time that there was just something about Derek Fisher that I liked. Boy was I wrong; I mean I was way off. We still don’t have set rotation and it feels as though we have completely abandoned the triangle. I can only remember one play in the where the triangle actually worked on Christmas, the rest of my memory is filled with iso-Melo plays in where he stands at the elbow and demands the ball and then dribbles twice and then pulls up for a jumper. The rest of the team just stands there as Melo attempts to go 1 on 5. I regress, back to Fisher. Remember that whole timeout debacle? I still don’t know if Fisher wanted one but come on Melo, try to get a better shot off. It wasn’t a terrible shot but it could’ve been better. I’m really missing Steve Kerr right now and how smart does he look for not taking the Knicks job? Stephen Curry and Klay Thompson look as though they will never miss and the Warriors have the best record in the NBA. The only move of Fisher that I have liked so far this year is when he took out all 5 of the starters against the Mavs the other week. Still it falls on his shoulders to get the team ready to play. Down 19 with 8 turnovers in the first quarter is really sad. Its poor coaching combined with a lack of ambition.

On the defensive end our numbers now look like this:

Now the stats are not that much different from about a month ago and while they are certainly in the bottom of half of all categories it does feel like the Knicks should have some more wins. We are still a very bad team and I am still happy that we might end up with a top 3 pick but I do feel as though we should have just a few more wins.

On to next topic: injuries have been a huge concern for us. The season started off with Calderon not being able to play because of a calf and has since gotten out of control. First it was rookie Cleanthony Early, who underwent arthroscopic surgery to repair his knee, then Iman Shumpert dislocated his shoulder. J.R. Smith followed the trail by coming down with a foot injury and finally a report came out Carmelo may have to go under the knife. If its true that Melo does in fact need the surgery we should hope that it gets done during the season. The season is already lost. Might as lock up a top 3 draft pick while we can. On a side note, is it just me or do the Knicks seem to LOVE playing without Carmelo? There seems to be this energy, this willingness to play and to play well. The ball moves around a lot better and the games feel like they are close throughout. Maybe we should explore the trade scene.

Bringing me to my next point. A report focusing on the Brooklyn Nets and their willingness to trade away any of their ‘Big Three’ led to think that the Knicks should make a move. Yes a trade with the Nets. The Nets were reportedly shopping around Joe Johnson, Brook Lopez, and Deron Williams. Deron Williams would be a great fit with the Knicks. Now the trade would not happen this year, it would instead be completed in the offseason but allow me to explain. NBA rules stipulate that teams can not trade away their first round pick in consecutive years, unless they received a first round pick in return for the same year. Because the Celtics own the right to swap first round picks with Nets I still think that Nets can trade that pick as long as they get another pick in return. So my scenario would be if the Knicks go on some sort of winning streak and don’t end with a top 5 pick, if we were then to swap first round picks as well as give up J.R. Smith or Tim Hardaway we could land Deron Williams. Now his cap hit is pretty high and his game has seemed to deteriorate since he came from Utah but he is still a top guard. The move would have to be done in the offseason for a few reasons. The first one being is that we see where our pick ends up and two we get the cap space to pull off the trade. Imagine if we get rid of J.R. in the trade, and Bargs and STAT are off the books. We gain around 37 million in cap space, if they take on the Williams contract the Knicks are still left with 17 million or so. Go after free agent Paul Millsap, draft a center with Nets’ pick, (pick will probably end up around #15), we have a solid starting five. Williams, Shumpert/Hardaway, Melo, Millsap, and a center. Not a terrible idea but its just an idea, Knicks will probably head in a different direction which is fine as long as Phil Jackson can recruit.
Colin Cowherd does a segment every now and then titled “Where Colin was right and where Colin was wrong” I figured I would do my own adaptation of it.

Where I Was Right:
….
Where I Was Wrong:
I thought Shane Larkin and Derek Fisher would great additions to the Knicks. Fisher can’t coach and Larkin looks confused out there. He is still years away and seems destined to be a backup guard.

I had the Rockets pegged as the 8th seed and the Grizzlies as the 9th seed.

I have to realize that this is the Bobcats after all. I mean the Hornets are the Bobcats, I should of known two good seasons in a row is not possible for this franchise.

Lastly, what’s with all of the fighting? First we had reports of Melo and Hardaway coming close to blows and then on Christmas Quincy Acy and John Wall got into it. Acy is suspended for the next game but we might win if Melo rebounds.