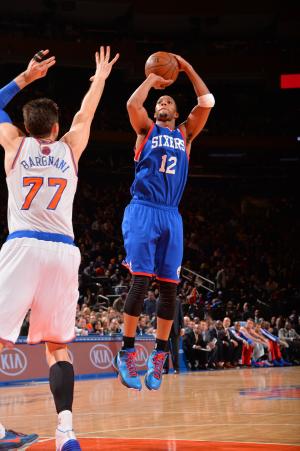 Both the New York Knicks and the Philadelphia 76ers are bottom dwellers in the standings, and both looked to snap a losing streak Wednesday night. The Sixers quickly got a double digit lead in the first quarter, going on a 13-0 run to lead by a score of 19-9 with 6:43 left in the quarter. Philadelphia came into the game with the second worst three point shooting percentage in the league at 31.5%, and it looked like it was part of the game plan for New York to leave them open. One problem with that strategy, the Sixers were not hesitant to take the open opportunities, and they made the best of it, knocking down five threes in the first quarter. This helped give the Sixers a 33-26 lead after the first quarter.
Andrea Bargnani kept the Knicks in the game, getting by his defender and straight to the rim a few times. Carmelo Anthony was held without a field goal in the first quarter, and went to the locker room briefly, cutting his finger on a block attempt at the rim. Anthony exploded for 13 points in the second quarter to get New York within 61-56 at the half. New York did not show any second effort on possessions, particularly in the second quarter. The Knicks would play good enough defense to make the Sixers miss, but was outhustled by Philadelphia on second and third effort plays. The Sixers had seven offensive rebounds alone in the second quarter, and ten for the first half, which led to ten second chance points.
Andrea Bargnani continued his aggressive play, and helped ignite a comeback late in the third quarter into the fourth. Bargnani made a very aggressive move, driving into the paint, attempting to throw down a dunk on two Sixers! He got fouled in mid-air, and had a rough fall, he would get back up and hit both of his free throws to cut into the Sixers’ lead, 79-76. The Knicks would then go on a 10-0 run to start the fourth quarter to take a 90-84 lead with 9:27 left in the game. Evan Turner would stop New York’s momentum, as he did all game long, scoring five straight points to get Philadelphia within a point with 6:47 remaining in the game. Evan Turner made his presence felt throughout the game, scoring career high 34 points, while also grabbing 11 rebounds.
New York would continually leave Philadelphia open from beyond the arc, and it cost the Knicks big time in the fourth. The Sixers would hit back to back threes to take a 96-92 lead with 5:11 left in the game. Shortly after, another Sixer would be left wide open again, Thaddeus Young would deliver a dagger three with 1:47 left in the game. Young had 19 points 7 rebounds and 4 steals for the game. The final score of 110-106 made the game look a lot closer than it really was, and that was because Carmelo Anthony hit two meaningless threes to finish the game. Anthony finished the game with 28 points 4 rebounds 7 assist and 2 steals in a losing effort.
Looking at the box score and seeing everyone’s individual stats you might think the Knicks played a decent game, but Philadelphia play at the fastest pace (Pace factor is an estimate of the number of possessions per 48 minutes by a team)so all the stats are inflated. One statistic that is telling is the fact that the Sixers only turned the ball over 14 times for the game. Philadelphia came into the game being the highest turnover team in the league with 17.5 turnovers per game. This shows that the Knicks were not harassing the Sixers enough on defense. Another category that is hustle statistic is rebounds, and New York was utterly dominated Wednesday night. The Sixers held a 54-39 rebounding advantage, with 17 of those coming on the offensive glass, this allowed for 19 second chance points.
Mike Woodson continue to rely on Raymond Felton, putting him in when the game was on the line. When Felton replaced Prigioni the Knicks were up by two with 7:15 left in the game, Felton would go on to get a layup blocked, and miss a crucial three. Felton had a +/- of -9 for the game, Pablo Prigioni had a +5 in the short amount of playing time he was given. Prigioni actually looks like a point guard when he is out there, he is running pick and rolls, and is willing to wave off Carmelo Anthony, when he is demanding for the ball. Simply put the offense looks to run smoother when Prigioni is the one commanding the floor, there is ball movement whenever he is in the game. New York will look to right the ship with Charlotte coming into town Friday night, but they will be no slouch, as the Bobcats has already handed the Knicks two defeats.