‘Sup folks, today we look at the most important part of the draft, the players (duh). Let’s see who the heck these people are, their strengths & weaknesses and how they would fit in with our Knicks. There are three tiers I will place all the players in: the hopefuls, the most likely and the buy-a-picks.
The Trade Downs

These are the players that *shouldn’t* be in play for the Knicks to pick at number four, but due to the Knicks interest to trade down, they are still in play to be picked in the late lottery or mid first round if the Knicks do trade down. Also due to the mass amount of potential options at this area of the draft, I am only looking at the prospects the Knicks have been already linked to. 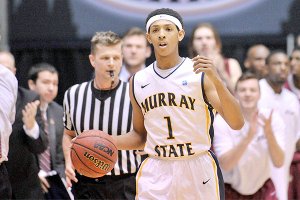 Cameron Payne is a 6’2” sophomore point guard coming out of Murray State. Payne was initially projected to be a mid to late first round pick, but over the last few weeks, he’s started accumulate some draft buzz. First, the Thunder promised to take him if he was still on the draft board by pick 14. Then the Sacramento Kings decided to work out him, mind that the Kings only have the 6th pick. Now here we are, with our Knicks brass intrigued by Payne. Payne is a crafty guard with a high IQ for the game, with good scoring ability (averaged 20.2 points per game last year) including a beautiful Tony Parker-esc floater, solid three point stroke (37%), and pull up jumper, with good defensive instincts to get into passing lanes and Payne is a good passer (6 assists per game) in the pick & roll. Payne on the flip side is not good at finishing with any contact, he is a streaky and sometimes ill advised shooter, Payne isn’t very consistent defensively and he played in a lower level of competition (than a player like D’angelo Russell did) at Murray State in the Ohio Valley conference. While it is worth noting that guards from smaller schools like Stephen Curry (Davidson), Damian Lillard (Weber State) and Elfrid Payton (University of Louisiana Lafayette), it’s harder to evaluate the talents like Payne coming from to these smaller schools because while they are putting up superior numbers, it’s important to note that he’s playing against inferior talents than to the Big 10 or ACC conferences. Payne has a player comparison to George Hill because Hill is a solid but not spectacular NBA starting point guard is a good three point shooter, good smart pick & roll passer and annoyingly pesky defender. In terms of Knicks fit, he would be in the mix for starting point guard along with José Calderón and Langston Galloway and would be a solid contributor in the backcourt. Also, since the Triangle doesn’t emphasize the need of a amazing point guard (while it wouldn’t hurt if it had one), Payne could fit in as a solid starting point guard in the Derek Fisher mold. Also, here’s a nice graphic to look at for more info on the dude. 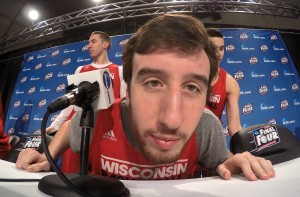 Ugh, do I really have to do one about Frank the Tank. Can I just show you him goofily dancing? Pretty please? Alright, alright, well the 7’1” senior Center from Wisconsin had a pretty good senior season. After doing almost nothing his first three years in college basketball, he erupted his senior year by averaging 18.8 points, 8.2 rebounds, 2.6 assists and leading his team to the NCAA Championship only to be beaten by Jahlil Okafor and Justise Winslow’s Duke. Kaminsky won the John R. Wooden Award, Oscar Robertson Trophy, Naismith Men’s College Player of the year, Associated Press College Player of the Year, Big 10 Player of the year and was a Consensus 1st Team All American. Alright, besides the shiny medals, what can Kaminsky do? Well, first of all he can shoot the ball. Kaminsky shot 41% on 3’s and has a very nice jumpshot allowing him to be one of those valuable NBA stretch fours. Also, he has a nice post game including a deadly dropstep to complement his shooting. Also, Kaminsky is very versatile with his skill set, allowing him to play either the 4 or 5 and very fluid with his game (so no, he’s not all clunky and awkward like Bargs). In addition to his offense, he has a very high basketball IQ and feel for the game. Kaminsky’s weaknesses are his athletic tools, defense and age. While Kaminsky has a good height, he is not very strong or athletic. This will make it more difficult for Kaminsky to finish and rebound (*note: Kaminsky is not a bad rebounder, it’ll just not be as much of a strength as it was in college) against NBA big men. Also, Kaminsky is going to struggle as a defender. While he does have some good lateral quickness in defending the pick & roll, he is not a shot blocker and not a good defender overall. Finally, Kaminsky’s age is a weakness. Kaminsky is coming out as a senior, so while this means he will be way more polished then a lot of players in the draft, he will not have the upside as they have. So ‘what you see is what you get’ with Kaminsky (which remeber, Kaminsky was pretty darn good). Kaminsky is very comparable to Boston’s Kelly Olynyk for a number of reasons. First, both are stretch fours with a nice post game predicated on their soft touch in the paint. Also, both are not very athletic, and not very good defenders and shot blockers. The only difference is that Kaminsky is probably a little better in the rebounding category and is already a better 3 point shooter. With the Knicks, Kaminsky would either come off the bench or start (depending weather Melo plays the 3 or 4) and his job would be to space the floor, and get buckets. Also, a line up with him would need another big that is a defense and rebounding guy to help cover Kaminsky’s weaknesses. 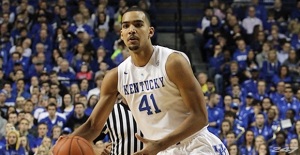 Trey Lyles was probably the player who was most affected by John Calipari’s platoon system this year. Lyles, who was ESPN’s 6th recruit (higher than Karl Anthony Towns at 9), played either off the bench or out of position (playing the 3 rather then the 4) most off the year in Lexington. Because of this, he only averaged 7.5 points, 5.3 rebounds, 1.3 assists. But then the Knicks became enamored with him and now we have another prospect to speculate about. Lyles strengths are his physical profile, and versatility. Lyles has good size at 6’10” 240 lbs for his position at the 4 or sometimes 3. Also, Lyles is very versatile, as he is able to play either forward positions because he is a good passer, has a nice handle and he is very smooth with his game. In addition, he seems to have a good basketball IQ. Lyles also has some clear weaknesses. One is that he is not very athletic and quick, which will make it harder for him to guard 3’s, and he isn’t very strong, which means it’ll be hard for him to guard 4’s. That’s a problem and it makes him a defensive liability. Also, he doesn’t have the jumpshot (only 14.3% on 3’s, 66.7% from the line) to really make him a stretch four. My player comp is kinda a stretch in Lamar Odom because it was hard to find a better one because Lyles game is very unique, but Odom’s versatility at the four is ultimately what made me pick him. In terms of Knick fit, I absolutely hate it. Why, well let’s see how he mixes with Melo’s game. Is Lyles a good defender? Absolutely not, we’ve established this already. Can he space the floor? Nope. Well, for a tweener forward, these are the skill I want to put next to Carmelo, meaning that if he was drafted, he would probably come off the bench. And no, unless the Knicks either trade way back into the first round or draft a player is already knowning that he is a project (Kristaps Porzingis, Myles Turner), then I’m drafting a player with intentions of him to start, not just to be Carmelo’s backup. All in all, I actually like Lyles and think he will play as a meaningful role player in this league for a long time, just hopefully not for these Knicks.