‘Sup folks, today we look at the most important part of the draft, the players (duh). Let’s see who the heck these people are, their strengths & weaknesses and how they would fit in with our Knicks. In this 4 part series, there are four tiers I will place all the players in: the hopefuls, the most likely, the trade downs and the buy-a-picks.

These are the players that will most likely be picked before the Knicks are up at four, but due to a draft day slide, they might be available. Also, no, I’m not gonna look at Karl Anthony Towns. There is no way he’s still available at four. 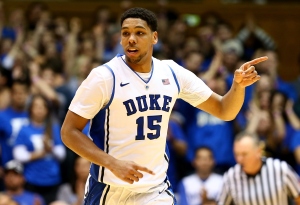 We start off with Jahlil Okafor, the post scoring dynamo from Duke. Jahlil came out Chicago’s Whitney Young High School as Illinois’s Mr. basketball and ESPN’s Top Recruit in there ESPN 100 for 2014, and along with buddy Tyus Jones, signed with Duke University. While at Duke, he did not disappoint. Starting off by winning the co – MVP in both the McDonald’s All American game and Jordan Brand Classic, Okafor averaged 17.3 points on 66% shooting, along with 8.5 rebounds and 1.4 blocks in his freshman year at Duke, that culminated in leading his team to a National Championship. In addition to that hardware, he was a Consensus first-team All-American, won the USBWA National Freshman of the year award, won the ACC player of the year award and won the Pete Newell Big Man of the year award (yeah, that’s a lot). When you think of his game, it all revolves around his post game. He has one of the most sophisticated post games that we’ve seen in awhile, enough to be compared to Tim Duncan’s. He will immediately be able score once he enters the league. In addition to that, he is also a very good passer out of the post, so finding open shooters wouldn’t be a problem with him (Amaré Stoudemire should take some notes…). Once we look past these strengths, there are some real weaknesses to his game. First, there is the defense. He is not a rim protector, which can be seen by his measly 4.6 block percentage, which is similar to Nikola Vucevic and Spencer Hawes. In addition, he is a terrible pick & roll defender, so especially with the fact this is the most run play in the NBA, teams could really attack him (trust me, you don’t wanna see a Calderon, Okafor pick & roll defense). But, there is also a disclaimer: Jahlil played on a very shallow Duke team, with his only backup being Marshall Plumlee. So, it was best for Okafor to not be aggressive on defense and get fouls, because they needed him to score to win. Am I saying Okafor is suddenly a good defender, no way, just merely that he’s probably not as bad as advertised. His other big weakness is his shooting. He shot an abysmal 51% from the line, and doesn’t really have a jump shot meaning he won’t be able to spread out defenses. You can see that I compared him to Al Jefferson, but really think that’s his floor: a consistent 20 & 10 guy who can score in the post, with below average defense. A better comparison might be Tim Duncan, but comparing Okafor’s defense to Duncan’s is insulting. Now how would he get to and fit with the Knicks? Well, assuming Towns goes first, maybe L.A decides that they prefer one of the guards in D’angelo Russell or Emmanuel Mudiay. Philly then picks the other guard, because they already have Joel Embiid and Nerlens Noel (or the guy Marc can’t pronounce). Then there he is and Knicks get him at four. While this may seem crazy, some NBA executives think that this will happen. With the Knicks, he would be the primary focus of the offense in the paint, and be a consistent 16 and 7 starting his rookie season. This would allow Carmelo to play more outside. This would also mean that Phil would have to bring in one more defensive minded frontcourt player, because Carmelo + Okafor could = atrocious defense. All in all, Jahlil Okafor has the potential to become a franchise big man for the next decade or so. 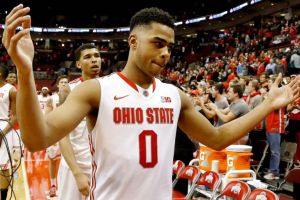 Highlights: HERE
Next off we have D’angelo Russell, the 6’5” combo guard out of THE Ohio State University. At the beginning of the season, D’angelo Russell was an unknown name. Yes, he did participate in the McDonald’s All American Game and Jordan Brand Classic, but nonetheless unknown. But not for long as Russell had a spectacular season, averaging 19.3 points (to lead all freshmen in scoring), 5.7 rebounds, 5.0 assists and 1.6 steals. This lead to being a Consensus first Team All American and winning both the Jerry West and Big Ten Freshman of the year awards. Similar to Jahlil Okafor, Russell’s strengths revolve around the offensive side of the court. D’angelo Russell is a great shooter, shooting three pointers at a 41% clip, and is also projected to be a good shooter at the NBA level. Also, he has a very nice handle, which allows him to get to wherever he wants to take a jump shot. Thirdly, and maybe most impressively, is his passing. Russell has amazing court awareness and instincts, allowing him to set his teammates, sometimes in the most dazzling ways. Russell’s two weaknesses are defense and penetration. While Russell’s SPG looks good at 1.6, Russell is not a great defender. His lateral quickness isn’t great and sometimes takes plays off. But, at 6’5” and with a 6’.975” wingspan, he still has defensive potential to be one of those long, rangy annoying defenders (MCW-like maybe?). Probably more glaring is his penetration. First and foremost: I’m not saying he isn’t a good athlete. Anyways, while Russell can get into the paint, it’s finishing that he has issues. He seems awkward trying to finish. He tries to use floaters way too often, and isn’t strong enough to go all the way. Also, while watching film you can see that he’s way too dependent on his left (dominant) hand, and sometimes looks like he has no right hand whatsoever. This is important because once teams clamping down on his shooting, he’s going to have to learn how to take his opponent off the dribble and finish in the paint even against the giant seven footers in the association. Now for player comparison, I know people love to say James Harden, but I don’t agree with it. While they share a similar body frame and passing ability, there offense is different. Harden’s mindset is to eurostep his way basket first, and shoot second. Russell is shoot first, and drive if I he has to. This is because while Russell isn’t a shabby athlete, he isn’t on the same level as Harden in hops and strength. So, I prefer Chauncey Billups. ‘Mr. Big Shot’ was never the most athletically gifted, but he always seemed to find a way to get points with his craftiness, whether it be by setting up teammates or hitting outside shots. Now to the Knicks, the Knicks get him if L.A and Minny take Towns and Okafor, and Philly decides that Emmanuel Mudiay is that guard for their future. Russell would be a perfect fit for the triangle offense, as big, smart guard who can shoot.