Marc and Jay give their thoughts on game 4

Join us on Twitch when we go live

Marc and Jay talk about the last few games, the players intervention with Rambis to play the younger guys, strategy for next season, the triangle and how that will effect future players and coaches, and more

So this happened again

Also a ton of this: 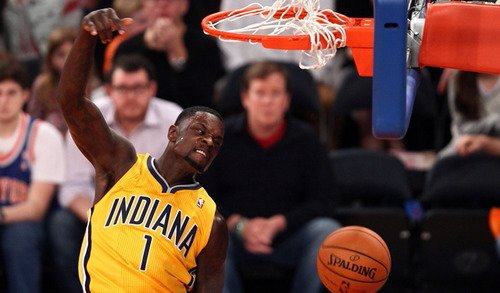 And some great defense:

Not to mention the awesome boxing out:

And of course what game would be complete without multiple injuries:

Written by William Lee
Both the New York Knicks and the Detroit Pistons were shorthanded, but it was the Pistons who overcame the adversities and was victorious Tuesday night. Winning 92-86 despite their starting point guard Brandon Jennings leaving the game early with an upset stomach. Pistons were also without point guards Chauncey Billups (knee tendinitis) and Will Bynum (groin, hamstring). The Knicks were also without their starting point guard Raymond Felton, who missed the game because of hamstring soreness and a pinched nerve in his hip. Beno Udrih stepped into the starting lineup, but was held scoreless in 18 minutes of action. Mike Woodson decided to go to a big lineup to match up with the Pistons’ large frontline. Without Tyson Chandler and Metta World Peace, Kenyon Martin joined Udrih in the starting lineup for his first start of the season. Woodson also decided to put JR Smith back to his sixth man role, and inserted Iman Shumpert back into the starting lineup.
Both teams got off to a hot start, shooting over 50% in the first quarter. The Pistons lead 26-24 after one period, behind seven points from Josh Smith and Kentavious Caldwell-Pope respectively. Andrea Bargnani led the way for the Knicks with nine first quarter points, highlighted by a driving and one dunk. The Knicks cooled off in the second quarter missing 14/21 shots, with so many misses, the Knicks kept themselves in the game with five offensive rebounds in the quarter. Amare Stoudemire showed flashes, with back to back spectacular dunks, part of an 8-0 Knicks run, to take a 34-28 lead with 8 minutes left in the first half. Brandon Jennings came back into the game, and was content with setting his teammates up, collecting four assist the rest of the half. With his fourth assist leading to a Gigi Datome buzzer beating three to end the half, to tie the game up at 43-43. END_OF_DOCUMENT_TOKEN_TO_BE_REPLACED

We talk about the win against the Bobcats and the thrashing from the Spurs, JR comes back from weed suspension and has his typical Sunday game, our new centerless rotation, trade rumors and much more